Brad and I have gotten into the conversation on more than one occasion about which Mega Man game is the greatest of them all. He prefers MM3. I too have […]

Brad and I have gotten into the conversation on more than one occasion about which Mega Man game is the greatest of them all. He prefers MM3. I too have fond memories of 3…and it did absolutely perfect more gameplay mechanics than previous iterations of the story…but Mega Man 2 will always have that special place in my heart!

Mega Man as a series started off as many in the Nintendo (NES) generation as yet another publishers attempt to create an icon or mascot for the company. For Campcom…Mega Man held the title throne for nearly a decade.   The formula was simple after Mega Man 2. Dr. Wily is evil. Dr. Light/Wright (pick a name) is your boss…you take out menacing robots of varying ilk and take out the good Doc over and over again. If you think about the formula is not all that dissimilar to Mario or Sonic iterations which the show has discussed rather frequently. Keep a core mechanic…iterate and make money. As I said…Mega Man was Capcom’s series. Even when they evolved into the X series on the SNES the same tried and true formula with a few new tricks kept our little man in blue on top.

As with Sega, Mega Man soon became an also ran mascot of the past after the 32-bit generation landed. “Retro games” were terms created to describe games on the NES as CD-based gaming took the helm and directed the future.

So what made Mega Man 2 so special? 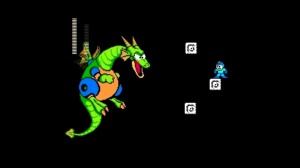 Mega Man 1 was an experiment, was glitchy and yet, still enjoys a cult following. 2 Really made the formula solid. Choose your enemy. There was a method which most people didn’t know at the time until you experimented like crazy. It was back before the internet so you had to try and fail to succeed. The game had terrific graphics for the time and to be honest I wish Capcom would reignite the series and bring Mega Man back! Graphics were terrific and have absolutely stood the test of time. The music was really the part I loved and remember the most. Each level has something catchy and THOSE tunes are still played today by rock bands and internet shows all over the world because they were just that good. Personal favorites were Bubbleman, Heatman, and the first stage for Dr, Wily. DAT. BEAT. DOE!

I recently watched some more famous gaming journalists go through so run throughs of the game…and rather poorly I might add. What I loved about it…is that games back in the day WERE HARD! Yes…you can die in one hit…something conventional modern gaming seems to have left out in the cold. You had to die several times to figure it out sometimes and more so…you had continues and check points, and losing your place in levels and other oddities by todays gaming standards.

Watching today’s gamer try to play a classic and lose terribly makes be proud to be a gamer from the old days. The creativity and determination for something as SIMPLE as Mega Man really makes me proud of the game and that I had the good fortune to grow up playing it. Now I have the Virtual Console edition on my 3DS. It’s wonderful! The music, the levels, the insane memories! Just like I remember. And yes…it was tough…still after almost 30 years. That’s crazy to me.

If you’ve not had the pleasure of playing this game I strongly encourage you to find a way to get your hands on it. It will be hard if you’re new…you’ll die a few times…but you’ll end up loving it just like the rest of us!

I’m not sure why the Mega Man formula failed so long ago while Mario has endured. Perhaps it’s for the best as we’ve watched Sonic slip into anime hell over the past few games. Whatever the case, Mega Man 2 stands as one of the greatest NES-based games of all time rivaling even that of the great Mario.