Final Fantasy Record Keeper. What better way to introduce myself to the Gamerfeed nation than to review one of my all time favorite series. Even those who have never picked […]

Final Fantasy Record Keeper. What better way to introduce myself to the Gamerfeed nation than to review one of my all time favorite series. Even those who have never picked up a Final Fantasy game before can finally join in to see some of what those who have fallen in love over the years have been talking about. So without further ado let’s dive in 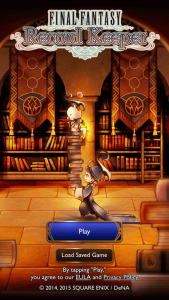 Music soothes the savage beast. The music from the Final Fantasy series wraps you up in a warm blanket bringing you back to days gone by for fans of the franchise. Nights staying up way to late trying to beat one more boss, or grind another level for the completionists like myself. Opening with tones of “Prelude” was the perfect choice. For me there would be many times where I had started a FF game but never loaded my game, and just listened to the music play. But beyond that when you select a certain room the themes of that game take over, and transport you back into that game. I personally hope they do a “Shadow’s Theme” (FF VI/III) level to hear that twangy tune, and add him as a character to chose from. Of course hearing the “Battle Fanfare” after completing each set of rounds is very fulfilling.

The developers chose to go with the 16-bit sprite look for the characters and the enemies. Which looks awesome on the 3D characters in this 2D world. You can still see Cloud and Tidus when you look at the sprites that represent their models. I would even go so far as to say Cloud looks better in this model than he does in the FF VII game play. It just works. But beyond that designing the enemies as the sprite versions as well is icing on the cake. They could have easily made a simple screen grab or artist rendering, but this flows seamlessly with rest of the game. Sometimes you just need a bit of the old school feel. Which I am all in for in this game.

Playing Record Keeper makes me feel like a kid again. A simpler time where my day job didn’t exist, and I actually had the time to play games. At times Record Keeper even feels like a story I would make up as a child where my heroes from other stories would team to conquer a greater evil ala Avengers. What 90’s kid didn’t team up their Transformers with their Ninja Turtles and G I Joes to take down the evil Lego overlords? The combination of the different games in the series work well together as we have seen with mash-up adventure games like the Kingdom Hearts series, and this works just as well. Even the concept that all these characters belong to stories of old passed down and the stories are in danger of being forgotten. How many of our own stories are being forgotten over time, and we wish we had a way to keep them fresh in everyone’s minds. Not in a way that changes what we loved (Michael Bay), but in a way that pays homage and respects the past. Final Fantasy Record Keeper keeps the memory alive for another generation.

But how does the game play actually work for this nostalgia trip? The use of Active Time Battle works very well even with the games that didn’t have it to begin with. It feels natural and smooth like the game has always been played this way. Adding an Auto battle feature to ATB is perfect for those easy battles where your sprites will wipe the floor against underpowered enemies. Just be careful to not start a battle and not pay any attention lest your characters are standing there getting pummeled waiting for you to tell them what to do, and not being able to fight back. Each part of a story has up to three rounds with a grading score at the end of each round. The total score you receive determines your Chocobo completion reward. You receive rewards for the completion of the part, the first time you complete a part and a greater reward for mastering the story with a Gold Chocobo score which is rewarded once. After mastering a level you also unlock an Elite version of that story to try later once you have leveled up your characters enough to try them. 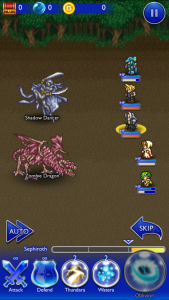 As with any FF game you use spells, but in Record Keepers this leans more toward the older game play style where only certain characters can only perform certain spells. Currently Kain (FF IV) and Cloud will not be healing anyone including themselves, but they can perform offensive weapon spells. Tidus (FF X) could do a self heal, and weapon spells. Whereas Tyro and White Mage are the only current characters that can give the others a pick me up when the going gets tough with a healing spell. As for offensive typically magic spells Tyro, Black Mage and Rydia (FF IV) are needed for those jobs. It makes party planning a very important part of the game play, and proper preparation of characters is key for certain bosses.

As of now current limit breaks (super moves) are very streamlined. When you get hit your limit break bar goes up, and once it goes up so far you can perform the limit break. But the move being done does not change or increase with power as you raise your limit break higher even though there are three markers for the ability. If you are lucky enough to pull a relic weapon you can access other limit breaks, but without paying money I won’t hold my breath for that. Though I do hope one day to get a lucky pull to maybe see Cloud’s Omnislash grace my screen. As of now Rydia is the only character that can use summons, which need to be built to access.

Beyond the grind of levels there are daily events to help you with certain aspects of your characters. Depending on the scheduled event of the day you can see increased experience, gold, weapon upgrade materials, armor upgrade materials and ability pieces. If you are needing a boost to a character, or have earned a new character this is perfect for leveling them. The first story event to go live was titled “Of Shinra and Legends,” for those who have played through FF VII before you will remember climbing the stairs of Shinra Tower forever battling wave after wave of enemies. This event is really no different. Even towards the end the last three bosses are no joke and require a little bit of strategy. (Spoiler: You have to use ranged attacks on the second and third to last bosses, because melee attacks will miss every time. Hope you leveled Black Mage and Rydia.) As the opening event of the game it helped explain what to expect from the game as you progress.

The game starts off with a very core group. The original characters from Final Fantasy I of Warrior, White Mage and Black Mage. You also receive Tyro the main hero of the Record Keeper story and Tidus as a reward for so many pre-registering for the game. Right off the bat you get Cloud as a reward for your first mission and other characters are earned thru completing subsequent stories. An encouraging sign as well is that the game has been out in Japan for many months and all characters are earned through completing dungeons and stories. You won’t need to pay for the characters just use your skills and knowledge to obtain them. Which is today’s mobile gaming industry is a big change of pace. Especially with so many iconic characters that people would be willing to pay for. *Cough* Shadow and Sabin *Cough*

So in review for me this is a must have for any Final Fantasy fan. You will have so many memories of past excitement from the games you used to play that you will thank yourself for keeping the records safe. For those who have even heard of Final Fantasy it is worth taking a look at. It isn’t as time heavy as a full game of the franchise, but you get enough story to know what happened. Things I hope they do add eventually would be unlocking little video clips from each of the games, and more stories to unlock. I personally can’t get enough of this game, and look forward to its future. If you have played the game already please let me know your thoughts and what you hope to see in the future of Final Fantasy Record Keeper .